Thank You for Going ‘The Extra Mile’ 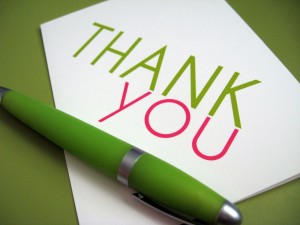 Life lessons sometimes come when you least expect them. The day I interviewed for an internship at a prominent company in Grand Rapids, Michigan, is a good example.

Having come in from out of town, I wanted to ensure that I got my thank-you notes to my interviewers that day before my return to Alabama. After my interview, I drove to a nearby McDonald’s and spent the next hour painstakingly crafting a personal note for each of my interviewers. As I drove back to the office to drop off my offerings of gratitude, I could not help but congratulate myself on such a prompt display of professionalism, and I imagined how impressed my interviewers would be to find their thank-you notes awaiting them at their desks after lunch. I considered not locking my car as I got out in the office parking lot but decided to err on the safe side and pressed the lock button on my door. Immediately upon hearing the sound of my car door shut behind me, I knew something was missing. My keys were sitting in the driver’s seat of my locked car.

As I stood in the office parking lot waiting for the tow truck my insurance company sent to help me break into my own car, it began to snow, and I couldn’t help but think about how tricky it can be to go the extra mile. This was not the first time my penchant for thank-you notes had led me into awkward territory, nor would it be the last.

A couple months earlier, I had had the opportunity to meet Ron Culp at the “Milestones in Mentoring” gala hosted by the Plank Center for Leadership in Public Relations in Chicago. As an avid Culpwrit reader, I was thrilled to exchange business cards with a man who I already considered to be a mentor (despite having never actually met him before). Immediately upon my return home, I set out to write Ron Culp a killer thank-you note. I thought over what had been so meaningful to me about our interaction and put pen to paper multiple times before crafting my final draft and dropping it in the mail.

I felt good about the opportunity to tell my role model how much I appreciated his time and looked forward to following up with him upon returning from winter break. However, upon my return, I found a surprising piece of mail in my university mailbox: my unopened letter with a bright yellow sticker emblazoned with the phrase “return to sender.” While I had been at home enjoying the assumption that my note had safely found its recipient, it had actually traveled all the way to Chicago and back to Alabama thanks to a misaddressed envelope.
I was mortified. What was I supposed to do, send my note in a new envelope two months late? I briefly considered cutting my losses and taking it as a sign that this connection was simply not meant to be, but I knew I could not to let the opportunity go to waste, no matter how late I may have been seizing it.

Instead of sending the note again by mail, I decided to wait to deliver it in person at an upcoming conference we were both to attend. I thought a hand-delivered note was more meaningful than a note arriving in the mail about three months late. I wrote Ron a new note apologizing for my first note’s tardiness and placed it in an envelope with my original note, still sealed in its yellow-stickered envelope.

To my great relief, Ron Culp was understanding and even amused by the situation. Despite all of the extra effort that it took for me to get one person his thank-you note, it was worth it. I now share an inside joke with a winner of PRSA’s Gold Anvil, which I doubt is something I could claim had I let myself be discouraged by an initial road block.

In the public relations field, we are expected to go the extra mile for our clients all the time, so we need to be willing to do it for ourselves as well. From losing business cards and contact information to letters lost in the mail to keys locked in cars on snowy Michigan days, life has a way of putting up obstacles to keep you from going the extra mile — that’s why it is called the extra mile. However, the cool thing about going the extra mile is that you really do come out ahead.